In 1999 I started messing with trying to tune below B standard on a 24.75” “Gibson scale” guitar. It didn't work at all, even with HUGE strings. I found “Fender scale” of 25.5” a bit better- I could get down to drop A and things be somewhat in-tune up the neck, but I wanted to go lower. I wanted a greater range of “dark” notes. I looked at what Meshuggah was doing and realized that it wasn't about how many strings they had as much as it was that their custom guitars were quite a bit longer than average. Their necks were 29.4".

Seeing as I only wanted to go down to G standard, somewhere around 28” seemed to make sense. At the time (winter of 2010) the only guitar I could find was the PRS SE Mushok. It was a 27.75” 6 string, pretty close to 28” and came stock as a solid body, humbucker equipped electric. That guitar worked pretty decently with a 13 to 72 gauge string set. It was a hair “floppy”, and there were a few dead spots, but it got me 80% of the way there. 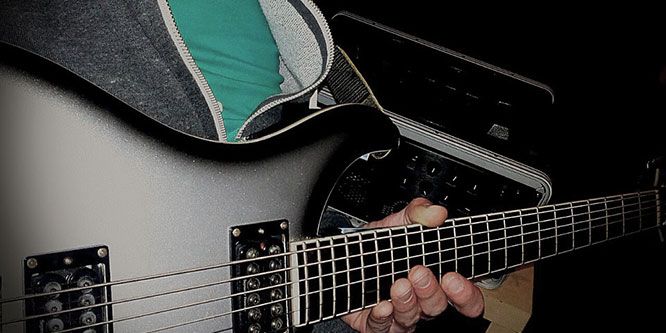 The RGIB6
Out of the blue in January of 2014 Ibanez dropped the RGIB6. I'm pretty sure that Artie and I were instant messaging each other about it at the exact same time that day.. Hahaa! Anyhow, I grabbed one a few months later and that extra 8th of an inch made all the difference with both sustain and tuning.

If you are tuning down, hate 7 and 8 strings and want stable tuning all the way up the neck, you might really enjoy hitting your local shop and messing around with this rad piece of wood.